The Monster Under the Bed - Engine Box 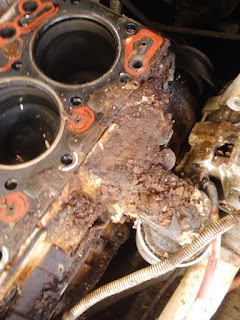 Sometimes the monster is real. Even though those we trust unconditionally assure us there's no monster under the bed, we learn otherwise. Just as soon as the comforting smile is followed by the door closing, the scaly claw and dank, sour breath emerge, accompanied by a dry low laugh.

And so on September 7 I would learn this lesson again: Never trust people who say 'everything will be fine' in a kind and nurturing voice at bedtime.

The hauling had been good. We all decided to take the boat to town as we all needed to be on that side for a couple of days("couple of days"= not a month). I'd had a couple of years of nervously gluing my eyes to the temperature gauge and worrying about the relentless advance of salt water on Detroit iron. Worrying for good reason, because parts failed, alarms went off in not-so-great conditions, shit happened.

I bought the boat 5 years short years ago. The motor and everything coming off it was severely rusted even at that time. I tried to scrape and paint every spring to make myself feel better, but I was always worried about the rust monster under the engine box. Kids on the boat? Engine monster, be nice. Rough weather? Please don't come out now, just stay under the bed. Really need to make this loan payment? Oh gods of the sea, salt and oxidation pass me by one more time.

Most of the time, those prayers were answered. Along the way I tried to learn to not be afraid, to not stress over broken things that needed fixing. It's just part of the job. I tried to train myself to take it in stride, to expect the malfunctions and not get stressed.

On this particular beautiful early September afternoon, the first since I redid the temperature gauge and the first since the late murky evening when we put in a call over the vhf saying we were having troubles and where we were, I was concentrating hard on being relaxed. The new mechanical temp gauge was reading normal, we had plenty of fuel and coolant, oil was good, business was good. I needed to stop believing in the monster under the bed and just enjoy the beautiful crossing.

But of course, it does not go this way. Two thirds of the way over Penobscot Bay, Megan and I, just like Obi Wan and Annakin Skywalker, both sensed the same disturbance in the force at the same time; probably because the disturbance in the force was loud and came from right under Megan's backside as she sat on the engine box. tstststststststststs!!!! She levitated- "what was that?!" I throttled back and gave up on trying to sooth my nervous system with deep breathing.  It was an obvious unhappy sound.

Pulling off the engine cover and going down forward did not yield a diagnosis. There was a little smoke, which it seems like there often is. Oil is fine, Coolant is fine. Nothing is oozing, flapping or visibly distressed except me.

I restarted and moved slowly forward. It was a beautiful evening. Everything was normal at 5 knots. The problem there is that it would be several hours before we got into Rockland.

I called Art Stanley, the Yoda of Diesel. "Go slowly into harbor, you will. Seeing you at 6:30 tomorrow I am."

The next morning, Art quickly located the malfunction, namely a rust hole through the supposedly bulletproof Cummins 210 cylinder head. Not something one can fix with muffler tape or Bondo. This is more in the nature of dismantling the engine, 3 weeks of down time and a four page list of replacement parts.

The next 3 weeks went by in suspended animation. I called to check on progress of locating and shipping and picking up parts. Michelle and Art did everything they could to find these rare sculpted items in cast iron and go pick them up on a Friday evening if necessary.

Finally, it was time to go back into the water on a particularly snotty, gray air, green wave, whitecap, white knuckle, red eye, stomach knotting sort of day. Isn't this fun?! Yes, it is, because MY boat is back in the water. Fuck yeah!

It would take a few more days to actually find the weather and schedule window to get back to Matinicus.

When we got back, I was looking for a fleece hat, but the clothes in the laundry basket consisted of tank tops and shorts. Abrupt climate change occurred while we were gone.

The monster is now back under the engine cover, but also is shiny and painted up in a cheerful color.

***
Extra bit: Matinicus is the kind of place you can install your own gas stove, check for leaks the way one friend taught you, pull it back from the wall to find the tiny little oven and broiler valve that explains why the range worked and the stove didn't, then fire the thing up to only watch it catch fire, take the bottom of the oven apart to find that part of the manual slipped down into the oven burner and charred itself, put the works back together and have it work just fine. If I didn't figure it out, Clayton or Paul would have got me pointed in the right direction.
Posted by Nat Hussey at 2:51 PM No comments: