As the last sardine cannery in Maine closes for good, I regret not eating more of these humble, Steinbeckian, omega-rich and sustainable fish. One more line of work that uses what we have here and brings us closer to our environment is gone. One more local food source that doesn't require extensive pesticide, fertilizer, petroleum based transportation, processing and refrigeration is gone. I accuse the dark art of fisheries management science.
The parent company said it closed Stinson due to fishing reductions for atlantic herring. These reductions came about not because regulatory data showed fewer fish, but because of the discovery of a 5 year old contradictory computer model and data problem. Data for all the subsequent years was then revised to comfort those who didn't like contradictory computer modeling data.

Dark matter and energy appear to the lay person as astrophysical fudge factors to explain away contradictory and perplexing observations. Light from distant stars and galaxies is dimmer than expected, suggesting the acceleration of the expansion of the universe. It was presumed that the expansion following the big bang would be slowing and eventually reverse as a result of gravitational pull between objects in space. The light shift observations messed up this tidy conclusion. There must be some force to counteract gravity and make galaxies keep running away from each other faster. What we're seeing is confunding, so there must be a thing out there somewhere... Let's call it "dark" matter and energy. Stuff we can't observe or pick up a chunk of along the shore or use to power laptops and toasters.

On to fisheries. There are scientists in the fishery regulatory environment, in government and in the employ of nonprofit organizations. Leaders demand that policy and regulatory decision-making be based on "good science." What is good science, other than science I agree with, or that fits my agenda?

Perhaps it is time for a new definition of science, especially in the regulatory environment.
When policy makers or advocates trumpet science being on their side, let's keep a clear distinction between measurement and observation and computer model fudge factors.

We might also find better ways of utilizing information from the empirical ocean observers- fishermen. Unfortunately, stimulus and other galactic scale federal bucks are going not to cooperative research, but instead to new offices for NOAA and to consolidate the New England ground fishery in favor of fishermen who never smell baity and who have more lobbyists than deck hands.
Posted by Nat Hussey at 5:31 AM No comments: 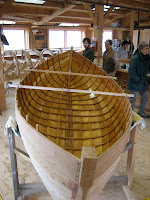 It's Saturday because we're on the couch at 7 a.m.. The nagging sense that I'm already behind gets more pronounced as the song birds get louder, grass is suddenly green and pieces of wood keep getting added to Sweet Pea. At some point, I ought to get outside and put rope together, paint buoys, groom up my traps and get some clue about what I'm doing. My yellow pad with the last winter list still has many lines not crossed out. Winter things aren't done. Spring things getting in arrears in a hurry. Overlapping wedges of shoulds and wegottas. Perhaps it's best to just burn that page- ceremonially revoke winter's leasehold on the list cortex in my brain. These uncertainties are answered for me as I hear my son stirring.
Posted by Nat Hussey at 4:20 AM No comments: